We’ve been told countless times, what you get out of a computer is only as good as what you put in. But what happens if you’re feeding a computer that learns and reasons?

And because there are so many applications for this kind of technology, the system becomes specialized according to what it’s used for.

“It’s not one giant machine that takes knowledge from person 1, client X and system Y,” explains Ong. “Watson is a solution tailored to specific industries and specific client use cases.”

Here are three real-life cases from the IBM Watson team and their collaborators that use real life data in surprising ways.

The Toronto Raptors’ system can call up and interpret game statistics from every member of the team – and perhaps more importantly, their prospective opponents, so that the team can be as prepared as possible.

“We’re working with the Raptors to reimagine their data instead of using pen and paper, to pick out who we should be drafting next, or what are some of the tradeoffs we need to make,” says Ong.

Data is an important aspect of this with a feature called “Tradeoff Analytics,” where the user can tweak various statistics and see possible results. But basketball isn’t just a numbers game – personality analytics of players and opponents can also provide some valuable intelligence. 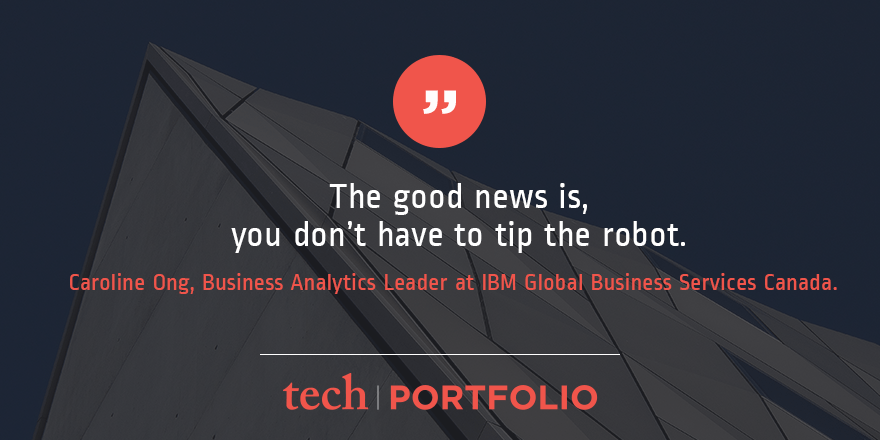 Medtronic, which makes devices that measure blood sugar levels in diabetes patients, are exploring how to incorporate IBM Watson technology to ease the pressure on caregivers.

Ong said that the aim was to improve “quality of life for the patient and for the caregivers of the folks who are dealing with diabetes. The two teams in IBM and Medtronic worked together to see how we predict hypoglycemic levels and events, up to three hours in advance – as opposed to waiting for things to happen before we act on them.”

The aim is to get peace of mind for the caregivers without having them constantly monitor physically every single time.

Other health uses of Watson include Under Armour, data from wearable technology that can be used to make fitness recommendations, and a partnership with the BC Cancer Agency that uses patient data, a genetic profile and medical literature to make personalized treatment plans.

A robot concierge being piloted by Hilton hotels uses IBM Watson cognitive analysis to give guests advice, for instance, on what nearby Italian restaurants have kid-friendly cuisine.

Connie, the collaboration between IBM and Hilton, takes and interprets local information such as restaurant and tourist information using speech to text, dialog and natural language APIs, and ingests information from IBM travel advice too WayBlazer.

Ong says that the project behaves like a virtual assistant, “but this time the communication is done through talking to a robot in the lobby of the hotel.”

The more questions the robot is asked, the smarter it gets – and the robot keeps a log of questions that people pose it, which is helpful for the hotel itself.

“The good news is, you don’t have to tip the robot,” says Ong.

For a free trial of IBM Watson Analytics click here