Tech Entrepreneurs Flock to Bali
Bali is one of the world’s hottest spots for “digital nomads,” and co-working spaces have been opening across the island to accommodate them.
Robert Delaney ● August 2nd, 2016

Computers are honored in Bali. So it’s no surprise that the culture of this island would attract tech innovators.

Bali, in the middle of the Indonesian archipelago, has grown for decades as a tourist destination, attracting people from around the globe to its beaches and terraced rice fields. Enchanted by the sweet scent of frangipani blossoms or the sound of lilting traditional music, some choose to stay, opening restaurants, boutique hotels or scuba diving schools.

Increasingly though, more of the island’s transplants are entrepreneurs developing apps and enterprise software solutions. 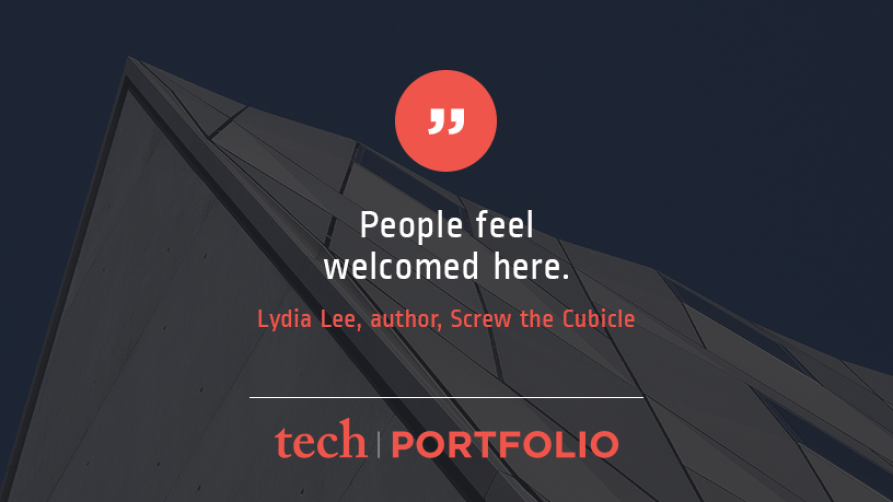 “Most people are attracted by the culture,” says Michael Craig, the Australian founder of Dojo Bali, a new co-working space less than kilometer from a beach that attracts surfers from Australia, Japan and California.

Bali is unique for how it has, for centuries, drawn on a mash-up of faiths and customs, creating a blend of Hinduism and traditional animist beliefs. Daily offerings left by Balinese are laid not only for spirits central to Balinese cosmology, but also for statues of Buddha and anything else recognized as meaningful or sacred.

The Balinese even have a day of recognition for things made of metal – including computers – to honor their contributions to community.

This acceptance of outside influences, including technological innovation, creates an environment that welcomes “digital nomads.” 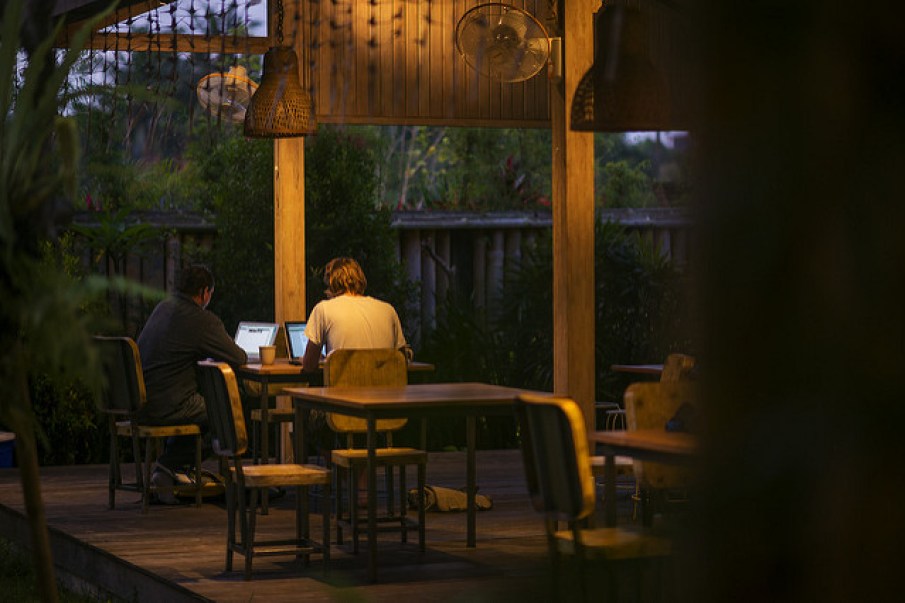 While Bali’s environment and culture has been a draw for artists and innovators for many years, there lacked a central hub in which entrepreneurs could collaborate, learn and work with one another.

That is, until March 2013 when former CBC producer Peter Wall noticed the swelling ranks of Bali’s dislocated entrepreneurs and opened Hubud. The co-working space whose name is a variation on “Ubud,” an area considered the island’s artistic center. Over the last two years Hubud has been featured in several media reports as being among the best co-working spaces globally.

“85 percent of [Hubud community members] self-identify as ‘digital nomads’,” Wall says. “They’re as ambitious and driven as people I’ve worked with in other parts of the world. But they want a better balance.”

In an indication of Bali’s popularity among untethered entrepreneurs, Bali shows up the most in a recent ranking of the “hottest hubs and co-working spaces in Southeast Asia.” 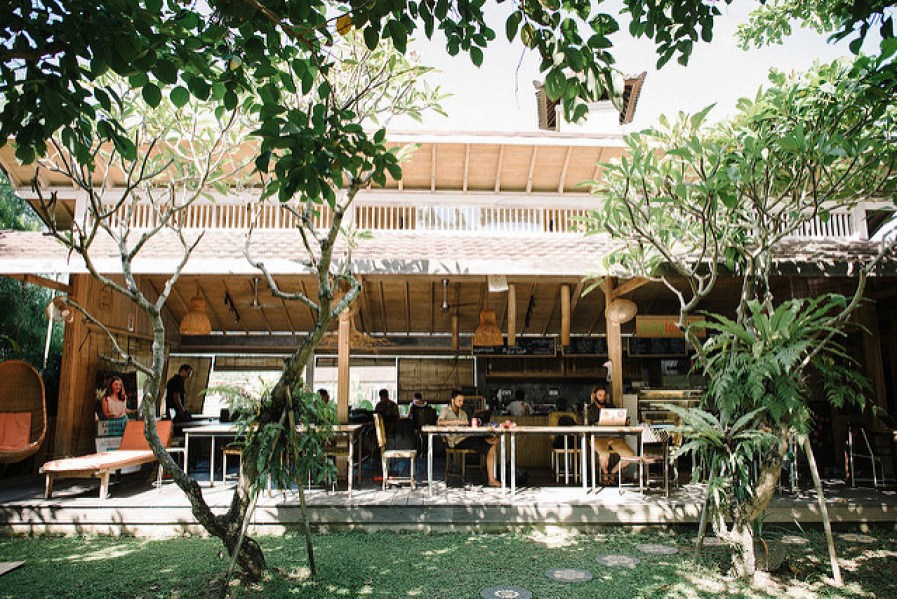 Hubud’s current space is at capacity having 3,500 members from 69 countries work in, or move through the space. Bali-based LineupHub and Wave also appear in the ranking.

To be sure, the island’s lack of direct access to venture capital is one of several factors that will prevent Bali from growing into a rival to Silicon Valley, Singapore, or Tel Aviv. That’s turning Bali into a community of “micro-entrepreneurs” as opposed to a startup ecosystem like the big city “valleys.”

But much like the unique nature of Bali in general, the island’s transplant-entrepreneurs turn that to their advantage. “If you fail [in Bali], no one cares,” Wall says. “Seed capital goes a long way and your cost of failure is very low.”

Wall says one of Hubud’s community members received startup funding in the Netherlands and received “tons” of applications for software developers wanting to work for him because they would be located in Bali. As many startups struggle with talent acquisition, Hubud has a unique draw in being able to offer a tropical development space.

Wall has demonstrated how Bali can be used as a development resource while client relations business development and administrative work can take place in other countries. Creating a link between Bali and other geographies is part of what is making Hubud unique.

“Make money in US dollars, live on Indonesian Rupiah, and outsource in Filipino Pesos;  I can afford to build a virtual and global team this way,”said Lydia Lee, a corporate escape coach and author of Screw The Cubicle, operating from Hubud. 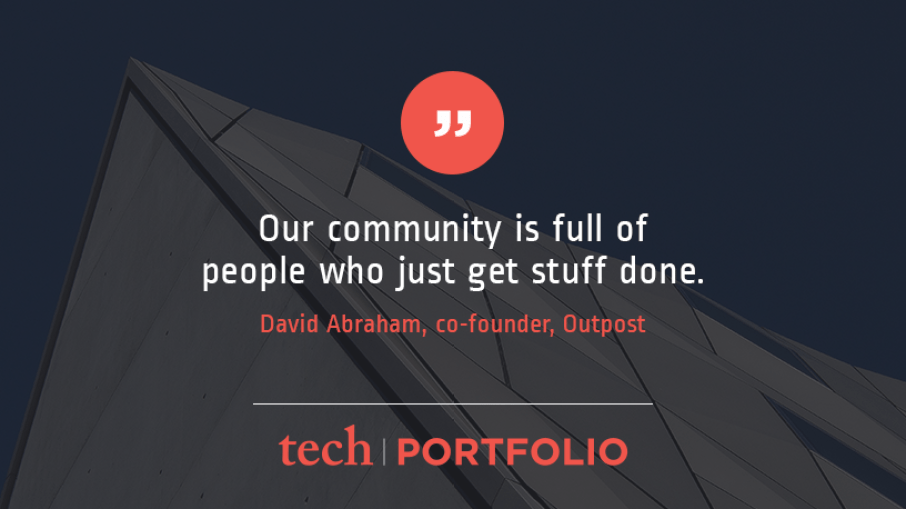 “Culturally, the Balinese people are friendly and eager to immerse foreigners into their ceremonies and religious events, so people feel welcomed here,” Lee says. “Coworking spaces like Hubud are popping up more and more around the island, with the speed of wifi improving greatly to host digital nomads.”

What Bali lacks in venture capital and academic institutions, it makes up for in creativity, which draws people with many skill sets to the island. Ubud, for example, was one of the settings in Eat, Pray, Love, the best-selling travel memoir by Elizabeth Gilbert, as well as playing host to one of Asia’s most well-known book festivals.

The Guardian calls the annual Ubud Writers and Readers Festival a “well-established” event, where the publication convened a writing masterclass last year.

“You choose a co-working space based on community,” said Josh Gray-Emmer, 38, who directs a network of developers in Lithuania and Ukraine, among other locales, from Dojo Bali. “There’s a great, eclectic mix of people doing all sorts of things here. I rely on places like this for a local support system.” 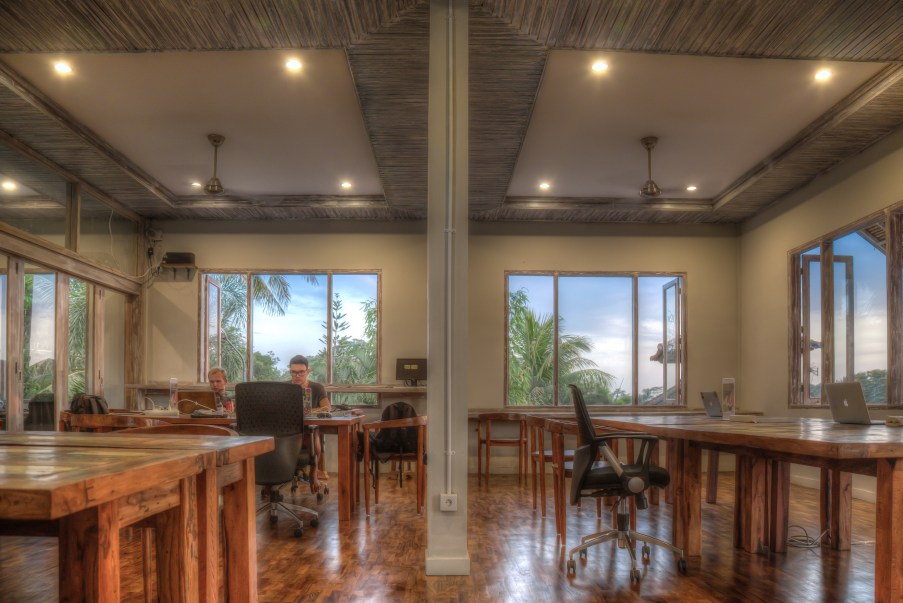 A working area at Outpost, a co-working community in Bali.

From his table at Dojo Bali, not far from the surf Mecca of Echo Beach, Gray-Emmer tasks his network of developers to design websites and build custom APIs for his clients, all of whom are customers of LA-based NationBuilder, a consultancy for politicians and advocacy groups.

“I’m in the future,” Emmer-Gray says. “Clients go to bed having sent me a list of things they want done, and I work on it while they’re asleep.“

In Bali, “there are many opportunities to meet talented people from around the world,” said Zach K.D., a former Hubud member who moved to Bali from Vancouver to produce a series of how-to videos and run an online clothing design and marketing business. “It’s easier to achieve a healthy work/life balance here than in Canada.”

Zach doesn’t use his full name in speaking with TechPORTFOLIO for privacy reasons, as many of Bali’s digital nomads are there working without a work visa. Like many countries in the region, work visas are difficult to secure without backing from global companies registered there. That’s to prevent foreigners from filling jobs that could otherwise go to Indonesians.

Still, Bali’s entrepreneurs are finding ways around these restrictions, staying for months or years building and supporting global businesses while surrounded by tropical serenity.

Outpost, another Ubud co-working space, which offers resort-style accommodations and massage along with shared office space, hosts between 20-40 people each day, according to co-founder David Abraham. 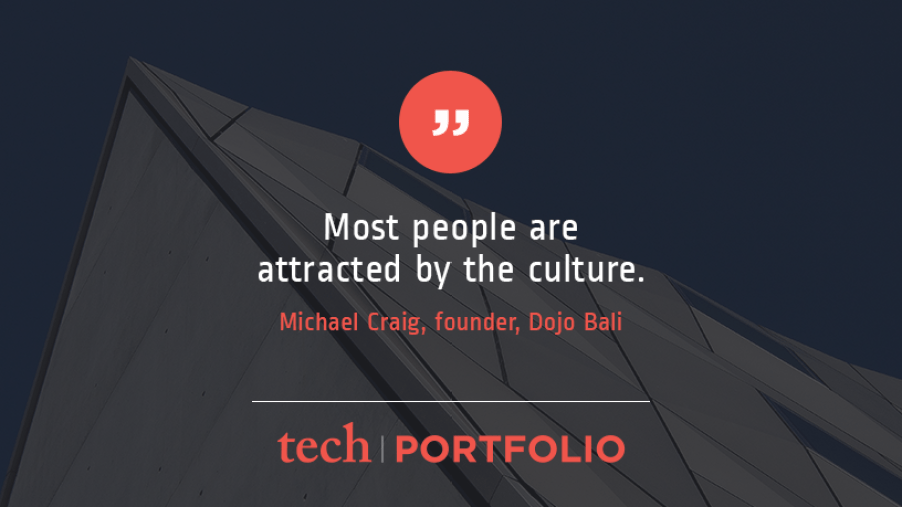 Asked what attracts tech entrepreneurs to Bali, Abraham says: “That takes more than amazing amenities. It takes a diverse, successful community where people share their ideas.”

“Need help raising money? Speak to Bryan,” Abraham says. “Need help crafting content? Talk to me. Need help with SEO, speak to the guy sitting next to me right now. Our community is full of people who just get stuff done.”

Exactly what has attracted writers, surfers, and travellers to Bali for decades before the digital nomads began setting up shop.