NYC Tech Catches Up to the Hype

The New York tech ecosystem is in an interesting place right now.  The emergence of NYC was a big story at tech conferences and in the press maybe four or five years ago.   Fast forward to today: on the one hand, NYC has become the clear Number 2 to the Bay Area; on the other hand, it’s hard not to notice that things have gone a bit quiet – at a minimum,  we seem to be past the stage of unbridled enthusiasm.

The bull case is that New York is now firmly established as a startup hub, and therefore it is less press-worthy than when it was first emerging; to wit, entrepreneurial activity and VC investment levels have never been higher (for context, with $1.9B invested, Q1 2016 saw almost 7x more VC investment in NYC than Q1 2012)

The bear case is that, for all the progress, NYC still suffers from many of the same issues that have plagued it for years: a relative dearth of $1BN+ exits, a lack of local anchor companies that can serve as acquirers, and a comparatively lower concentration of talent, particularly when it comes to not just starting, but actually scaling, startups.

Those are non-trivial concerns: while they offer some protection, network effects can just as easily peter out as they can get stronger – an ecosystem is fundamentally a living and breathing organism.

My take:  New York is in the process of catching up to the hype.  That doesn’t make for splashy headlines, and takes a long time, but the reality of the NYC tech ecosystem coming of age is actually happening right now.

The Slope of Enlightenment

So where are we? If there was a Gartner hype cycle for emerging tech ecosystems, my sense is that New York would probably be somewhere in the “slope of enlightenment” phase. 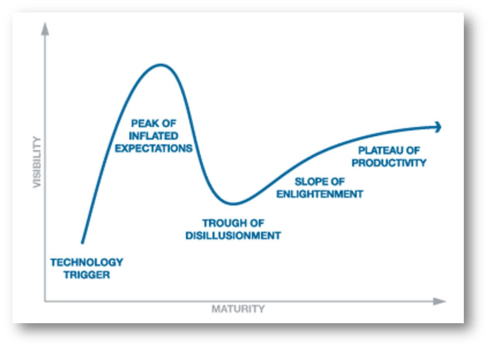 Both the scale and the steepness of the slopes are not right, but this is probably directionally correct.

New York had a long ride to the “peak of inflated expectations”.  Throughout the 90s and the 00s, New York went from having a handful of entrepreneurs and VC firms to something that felt more like a real community (then known as “Silicon Alley”).

But it probably wasn’t until 4 or 5 years ago that people started talking excitedly about New York as having the potential to be a major global tech ecosystem.  There certainly was tons of momentum, with everything coming together nicely.  It had a deep connective tissue of meetups, conferences and new incubators.  It had a mayor, a tech founder himself, who truly got it.  It had some VC firms like Union Square Ventures with national appeal, and West Coast firms were starting to actively invest in later rounds.   And most importantly, it had a whole series of fast-growing startups, the bloodline of any ecosystem.  The press (a lot of it New York based) was all over it – not only was New York going to take over Boston, it was also about to give Silicon Valley a major run for its money!

A lot of the above is still true, but unfortunately, there has been a number of hiccups along the way.  A lot of the “poster child” companies that were frequently mentioned then have gotten into various levels of trouble, after raising large amounts of VC money.  Gilt ($271M raised) had an underwhelming exit.  Fab.com ($336M raised) was a flameout.  Quirky ($175M raised) went bankrupt.   Foursquare ($166M raised) has been working on finding its second wind as a data company.  There were some great acquisitions (Tumblr’s $1.1BN acquisition was a watershed moment), and some New York startups had IPOs – but unfortunately, those newly public companies, like many others across the country, experienced difficulties in the public markets (Etsy went from a $3.3BN market cap at IPO to $1.1BN currently; OnDeck went from to $1.3BN at IPO to less than $400M currently), with Shutterstock being the exception.

Finally, there are a number of large startups in New York that have been doing quite well, but are now reaching the 10-year mark, and have yet to reach an exit.

All of this had led, perhaps not to “disillusionment”, but certainly to more nuanced feelings, and people generally realizing how long it will truly take for New York to come into its own.

As any student of emerging tech ecosystems knows, the key dynamic to success is the “rinse and repeat” cycle. You need several waves of successful tech companies to go through the whole cycle of founding, financing, scaling and significant exit.   Post-exit, the hope is that successful founders, employees and investors then contribute back both money and expertise to the next generation of tech startups, a few of which eventually become highly successful themselves and then provide money and expertise to the following generation.

The trouble is, each successive cycle takes years, because the average successful startup takes 5 to 10 years to get to a large exit.

One key reason the Silicon Valley has become such a powerful network is that this “rinse and repeat” cycle has been happening there for decades, at least since the 1940s and 1950s (Hewlett Packard), with a real acceleration in the 1970s and 1980s (Apple IPO, founding of Kleiner Perkins, etc).

At the other end of the spectrum, some of the more recent tech hubs are arguably just at the beginning of their second cycle.  In Paris, for example, the next cycle is under way, with alumni of successful startups like Criteo or Exalead creating a number of new ventures, such as Algolia and Dataiku, but those are still relatively young (2 or 3 years in).

New York is somewhere in the middle, but probably still on the earlier side – perhaps 5 cycles in?  The comparative lack of exits doesn’t help, as it slows down when the next cycle starts.  The point here is that, while New York is well on its way, things take time, and you can’t just hope to rush through cycles – getting to a fully mature tech ecosystem will require continued patience.

Now, to the bull case about New York.

One particularly apparent aspect, from my perspective: there is now a much larger pool of experienced startup talent to choose from.

It’s certainly not perfect – as mentioned above, there are just not that many people who have been repeatedly through the growth stages of the startup life.  But New York has come a long way in a few years.  Not so long ago, when looking for, say, a VP of Marketing, or someone to run operations, startup founders often needed to really stretch — could that agency person somehow figure out the marketing job? Could that smart associate from Goldman Sachs learn the operations role on the job?

That’s much less the case now.  There are a bunch of people in the system who have now worked at 2 or 3 startups in the past.   Even companies like Fab and Quirky, despite not making it past the goal line, have produced legions of experienced talent, who have now joined other startups or started their own.

There’s also an interesting emerging phenomenon around people starting to leave the NYC outposts of the various West Coast tech giants after several years of service there — Google, in particular (whose impact on NYC has been incredible), but also Facebook, Twitter, Microsoft — to join or start NYC startups.  For example, the three founders of Cockroach Labs (in the FirstMark portfolio) are all former senior engineers at Google who moved East to work at Google New York, and then decided to remain in New York to  start new ventures.

Finally, we’re seeing an increasing number of people who are moving from the Bay Area to New York.  Some are people who are originally from the East Coast, or went to school there, and decide to move back after a few years in the Bay Area, because they want to live in New York.  Others are executives with no particular history on the East Coast, who are recruited into NYC startups — the interesting trend here being that those execs feel increasingly comfortable that there is enough density of quality startups in NYC that they could find another great job, should this one not work out.

The other big story about New York is that it is no longer just about ad tech, media, commerce and fashion tech.  In fact, it hasn’t been for years, but perceptions are slow to evolve, and it seems to still be what many people outside of New York seem to believe.

One way of thinking about New York’s tech history is one of gradual layers, perhaps something like this:

But New York has seen explosive entrepreneurial activity across a much broader cross-section of verticals and horizontals, including for example:

The Rise of Deep Tech in New York

Finally, one trend I’m personally particularly excited about: the emergence of deep tech startups in New York.   By “deep tech”, I mean startups focusing on solving hard technical problems, either in infrastructure or applications – the type of companies where virtually every early employee is an engineer (or a data scientist).

For a long time, MongoDB was pretty much the lone deep tech startup in NYC.  There are many more now.  A few of those are in my portfolio at FirstMark:  ActionIQ, Cockroach Labs, HyperScience and x.ai.   But there’s a lot of others, big and small, including for example: 1010Data (Advance), BetterCloud, Blockstack Labs, Chainalysis, Clarifai, Datadog, Dataminr, Dextro, Digital Ocean, Enigma, Geometric Intelligence, Jethro, Keybase, Placemeter, Security ScoreCard, SiSense, Syncsort or YHat – and a few others.

The New York data and AI community, in particular, keeps getting stronger.  Facebook’s AI department is anchored in New York by Yann LeCun, one of the fathers of deep learning.  IBM Watson’s global headquarter is in NYC. When Slack decided to ramp up its effort in data, it hired NYC-based Noah Weiss, former VP of Product at Foursquare, to head its Search Learning and Intelligence Group.   NYU has a strong Center for Data Science (also started by LeCun).  Ron Brachman, the new director of the Technion-Cornell Insititute, is an internationally recognized authority on artificial intelligence.  Columbia has a Data Science Institute. NYC has many data startups, prominent data scientists and great communities (such as our very own Data Driven NYC!).

Hype often precedes the reality of any market.  This was very much the case for the New York tech ecosystem, but NYC is now growing into its reputation.

As an added bonus, the New York tech community continues to feel truly special.  Perhaps because NYC is still in the “underdog” phase, there’s a spirit of openness, collaboration and solidarity that is very palpable — almost ironic considering the reputation of New Yorkers!

At FirstMark, we feel proud to be part of this community, do our best to keep building it (through our four monthly events: Data Driven, Design Driven, Code Driven and Hardwired), and we are more bullish than ever about New York.

Tags: Comment, New York City
Posted in Focus, Funding, Technology | Comments Off on NYC Tech Catches Up to the Hype