What Matters for Startups in Social Media and IRL: Funding
Fundica, Matt Roberts, and raising capital stick out as talking points.
TechPORTFOLIO Staff

For startups in Canada, raising capital is a major talking point both in social media and in the real world.

A funding roadshow and an article by BDC’s Matt Roberts on the current state of VC investments show up prominently as key topics of the current startup ecosystem social media conversation in Canada.

Over the past three months, the conversation has been active and diverse with 1,067 tweets from 636 accounts, and a combined reach of 5.1 million potential impressions. 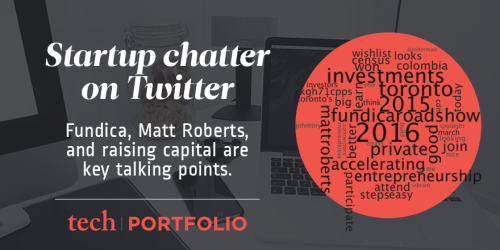 The Fundica Roadshow appears near the center of the word cloud as people attending the event have shared actively in social media. The roadshow is a Canadian initiative by Montreal-based financial services company, Fundica. With stops in 10 Canadian cities between February and May, the event aims to “to educate entrepreneurs on funding opportunities and facilitate connections between funders and startups.”

BDC’s associate director of venture capital Matt Roberts is another large term in the word cloud. Roberts sparked social media activity and conversation with this post:

This CDN $ collapse is crazy – I shared some thoughts on what I think this means for the Canadian Tech Ecosystem. https://t.co/HCGAMr2VhG

In the post, he says 2016 won’t be as good as 2015 when it comes to funding for Canadian tech companies. The key issue? “The collapse of the Canadian Dollar, hitting a low that hasn’t been seen since the 2003,” he writes, which will impact talent and venture capital funding.

One of the most retweeted pieces of content in the conversation was from the Feb 23 launch of the City of Toronto’s #StartUpHereTo project, which aims to create awareness of, and support, Toronto’s startup ecosystem.

Capturing Canadian entrepreneur stories also emerged as a popular part of the conversation. Another top retweeted message was about Startup North’s entrepreneur survey.

Canada’s first ever #entrepreneurship survey is underway, hoping to track the evolution of the #startup ecosystem. https://t.co/Gq6dDBII1g

The top shared articles in the startup ecosystem conversation online include: