What IBM’s Watson Thinks of HBO’s Game of Thrones Characters
Using cognitive technology hosted in the cloud, we analyzed four Game of Thrones characters to see what we could learn.
Quin Parker ● May 20th, 2016

When we found out we could access IBM’s Watson to analyze conversation tone, obviously our first idea was to apply it to HBO’s Game of Thrones.

So we coded a scraper and extracted the dialogue on Wikiquote of all the main characters. We then unleashed Watson’s Tone Analyzer — a tool for understanding the emotional impact of text — to assess five core emotions, as well as overall emotional stability, confidence, and agreeableness.

The Tone Analyzer is part of IBM’s Watson suite that includes several tools for textual analysis, such as concept search and linking, visual comprehension, and language translation. It’s accessible through an API on the IBM Bluemix cloud platform.

It’s no surprise no one in Westeros turned out to be especially emotionally stable (we’re looking at you Ramsay Bolton). In fact, the majority of characters we tested, from the Khaleesi herself to Jon Snow and even jolly old Tyrion Lannister, turned out to be mainly very angry and not at all joyful.

But the results we did find – some expected, some not – reveal a bit more about a few of the players.

Here’s our (spoiler free of season six, we promise) analysis. 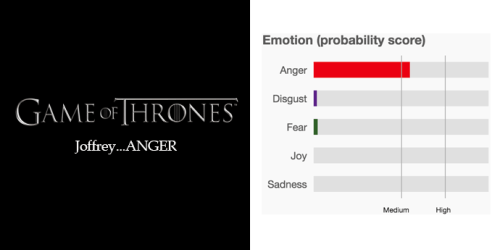 Rage is the overriding emotion for Joffrey the False. Interestingly, though, no one particular line in our textual analysis stands out as being obviously furious or malicious. This, of course, is worse because it just shows the continual burning rage inside the boy king.

RESULT: Even ANGRIER than Joffrey 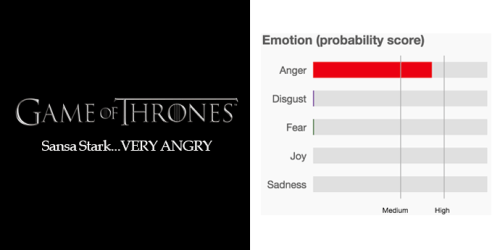 Sansa’s incandescent fury is clear at several points – and the Tone Analyzer has picked up on this. Her reputation among fans as a passive flower is completely undeserved. There’s not a great deal going on with conscientiousness, which could suggest machinations to come.

Combine this with her sky-high confidence and it seems we have identified that Sansa is a rising power player in the battle for the Iron Throne. 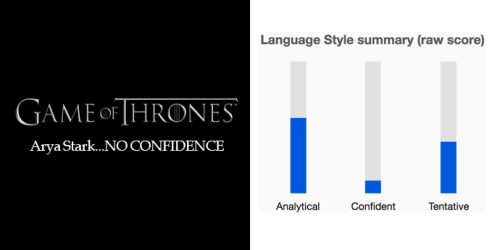 A girl has no name…or confidence. Arya rates very low on the confidence scale for a Game of Thrones character. In fact, there are only four lines in her entire script that rate as confident. The rest don’t score anything at all. It looks like the first step of Faceless Man assassin training is breaking the spirit.

Still angrier than a burning nest of wasps, though. Just ask Meryn Trant.

RESULT: Calm and in control 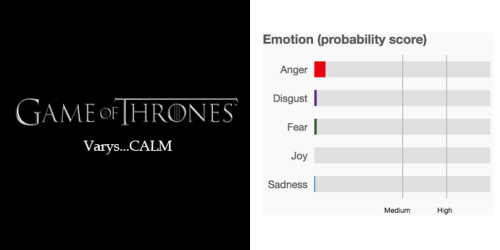 Varys once said: “The storms come and go, the waves crash overhead, the big fish eat the little fish, and I keep on paddling.” With lines like this, we’re not shocked to see the tone analysis of his language shows he rarely raises his voice. He’s unique in Westeros in being able to regulate his emotions and keep his cards close to his chest. Clearly, he’s perfectly suited to his role as spymaster regardless of who he serves.

Is there a character you want to analyze? Try the Tone Analyzer now.

If you want to incorporate IBM’s Watson into your own application hosted in the cloud, click here.