Why Canada’s Tech Scene is Worth Getting Excited About
Naysayers miss the point. Canada's tech ecosystems have potential; they're just relatively young.
TechPORTFOLIO Staff

Editor’s Note: This piece was re-printed from a LinkedIn Pulse item with permission from the writer, Jeff Booth, who is Co-Founder, President and CEO of BuildDirect. The original version lives here.

Earlier this year, Microsoft added its fourth development office to downtown Vancouver, joining a who’s who of U.S. tech names that have set up shop in Vancouver in recent years, including Amazon.com, Salesforce.com and Facebook.

It’s tempting to say the city is blossoming into Silicon Valley North but, to truly earn that title, Vancouver — or any other Canadian city for that matter — must build its own ecosystem of successful, home-grown tech companies. In fact, we’ll know Vancouver has made it when tech companies from here are setting up outposts in other places.

Of late, it’s become fashionable to point out all the reasons this will never happen. Canadian tech naysayers point to troubles finding experienced senior management, a shortage of funding and a university system not pumping out enough research and engineering talent as reasons Canada will never compete with hubs like California and Washington. Some of those critiques are valid, but do they predict the future or do they just describe the present? 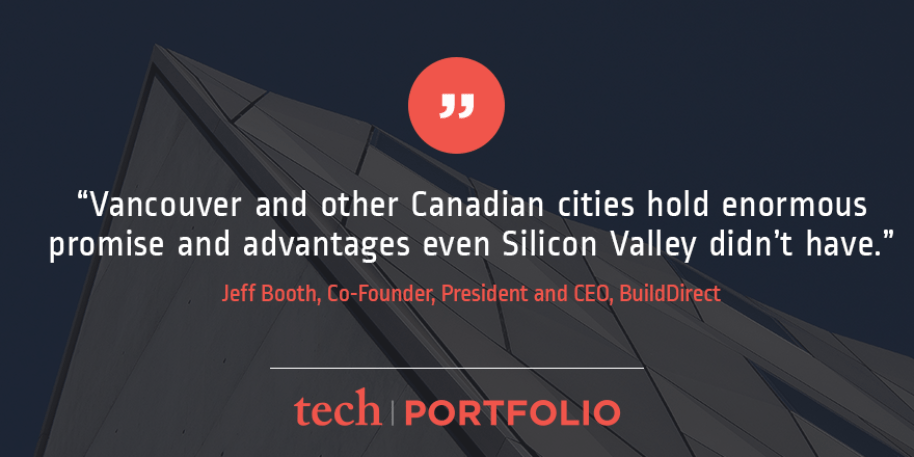 Early on when building BuildDirect, I was asked to sit on a Conference Board of Canada roundtable on boosting tech innovation, comprised of leaders in industry, academia and government. Although the group was set up to help Canada win, the discussion always felt like an endless circle of laments: why entrepreneurs sell out too early, why Canada doesn’t celebrate our successes, etc. What frustrated me most was it seemed everyone got it backwards.

It’s the entrepreneur who starts the whole cycle by having a vision bigger than himself and carrying it out. That act, the vision of a different future, is what creates the value that attracts the rest of the ecosystem.

The reality is these are early days for aspiring technology centres like Vancouver, Toronto or Waterloo. It’s easy to look to established ecosystems and see countless shortcomings in comparison: there isn’t a giant anchor company like Google to spin off ideas and talent; soaring housing prices and border bureaucracy sway top talent from moving; start-up capital can be in short supply.

But that’s a near-sighted approach. Looking at the bigger picture, Vancouver and other Canadian cities hold enormous promise and advantages even Silicon Valley didn’t have in its infancy. We should be looking to leverage those advantages instead of wallowing in our shortcomings. The more apt comparison for Vancouver isn’t the Seattle or Northern California hubs of today, but where those centres were at their beginnings.

From Prunes to Electronics

A century ago, the Santa Clara Valley’s export specialty was a plum variety that could be processed into prunes. In fact, it wasn’t until 1971 when the Silicon Valley moniker was first used. The area’s technology industry began with World War II-era government investment into radar and electronics research at Stanford University. More government money flowed throughout the Cold War to the Valley and to Massachusetts’ Route 128, fostering the growth of now-famous companies like Hewlett-Packard and Xerox PARC. Seattle’s smaller hub was built around companies like Boeing.

Often overlooked is the fact that Silicon Valley’s tech sector didn’t overtake Massachusetts in profits and innovation until the 1980s — proving that a smaller, weaker player can grow and win. Even then its economic output was a fraction of what it is now. It’s easy to see the economic powerhouse that Silicon Valley has become, but it’s worth remembering the long road it took to get there and the many failed companies it left along the way. The vibrant ecosystem we see now is a byproduct of those struggles.

It’s also important to point out the role that determined, focused individuals played in these early histories, when success was anything but a surefire bet. Silicon Valley literally began in a Palo Alto garage rented by Stanford University graduates Bill Hewlett and Dave Packard, who started the Hewlett-Packard Company in 1939 with $538 in working capital and a used Sears Craftsman drill press.

Canada does not lack people with great ideas and grand vision. It’s often overlooked that one of the most esteemed innovators of the 21st century, Elon Musk – the mind behind PayPal, SpaceX and Tesla – is a Canadian citizen and attended Queen’s University in Kingston before ultimately moving to the U.S. Vancouverite Stewart Butterfield created the original photo-sharing site Flickr in the mid 2000s and went on to build the office social platform Slack, now headquartered in San Francisco and valued around $4 billion.

At the same time, dedicated entrepreneurs can achieve great success within Vancouver’s ecosystem, and help the ecosystem as a whole flourish. This is the difficult path that Silicon Valley’s founders took, and that local companies like D-Wave Systems, Hootsuite, Shoes.com, Mobify and my own company are committed to taking. We might have reached a steeper growth trajectory by moving to the U.S., but wanted to build something great here.

Yes, there’s room for improvement on a variety of fronts north of the border. We need to ramp up investments in education, loosen red tape for importing talent and build up our funding infrastructure. But true entrepreneurs see opportunities where others see problems. They go where everybody isn’t.

In that sense, there are more opportunities in Vancouver in 2016 than in the Silicon Valley of today, precisely because not everybody has seen them. Investment opportunities here are under-exploited compared to the sky-high valuations seen in more prominent centres, a fact that many of smartest (and best funded) VCs are clueing into, bringing new sources of funding to the city. Not all home-grown companies will succeed, but some will — and the payoff is going to be more than just money.

We’ve seen that building a technology hub takes time, resources, and innovation, but those investments combine to create a self-sustaining engine for economic growth and advancement. The sum is far greater than the parts.

Vancouver is a young ecosystem, but it’s a closely knit community whose leaders reach out and support one another. It can achieve greatness if it holds to the kind of faith that built Silicon Valley from its humble start. And the same goes for Waterloo, Toronto and the other emerging and established tech hubs in Canada. The potential is, in fact, enormous, if we can see beyond the early hurdles.

There will always be shouts from the sidelines from people who say things can’t be done. But, to borrow a line from Teddy Roosevelt, the credit belongs with he who “spends himself in a worthy cause; who at the best knows in the end the triumph of high achievement, and who at the worst, if he fails, at least fails while daring greatly.” This may seem melodramatic, but for entrepreneurs dedicated to building a tech ecosystem in Canada, business is truly more than just business. This is a project fueled as much by passion as by profit, and one that promises extraordinary things in the years ahead.