How Code Breaking Inspired Shopify Lead to a Dev Career
For the first in a series of profiles for our theme for June, we look at what led Julie Haché to Shopify.
Angela Misri

Julie Haché, who leads Shopify’s on-boarding team, had a tougher time than most getting into a senior position with a billion-dollar tech company. That’s because “most” of the tech sector’s leaders are men.

“The biggest struggle was that I didn’t have female role models,” Haché explains, “I tried really hard to fit in, and almost to hide things about myself, be less girly. Starting out, it really affected my confidence, especially in smaller companies.”

Haché says she was always engaged at school, academically and socially, and started her university career in pre-med at the Université de Moncton, which she found to be a welcoming environment for a young woman. “I always liked computers, but didn’t think of it as a career. Then a friend of mine, who was a programmer, recommended a book to me called Cryptonomicon.” 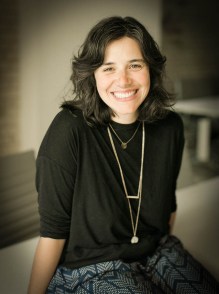 She read the book – about WWII code breakers – over the summer, and “decided to play around with her laptop and I managed to recompile my first kernel. That was the moment that I got hooked. I knew I needed to learn more about this whole world.” She transferred into the computer science program where she was the only woman in her year.

“It’s really only when I switched to computer science that I started questioning my gender as a thing. I’ve always been very confident in everything I did, with extremely good grades at school, but it was only when I got into programming that I really started doubting myself. When people are by default assuming you can’t do things, it’s not fair and it’s really hard.

Haché worked as a web developer at a few start-ups early on: 76Design, RealDecoy and UnSpace Interactive before joining the Bitmaker Labs in 2013. Bitmaker is where she saw the most change, and where she caught the bug for helping to develop others. She says the tech industry culture is changing, though slower than she would like.

“In the past year especially, I’m seeing a shift. There’s a lot more positive action in the programming communities trying to reach out to women, increasing awareness and communicating that they want women to be there.”

Haché says she’s at a point in her career where she thinks a lot about helping others achieve their goals, and that might mean going back to school to learn more about leadership in engineering.

“I’m glad I persisted and powered through this, and many years later, there are so many amazing women out there doing the same thing. These days, there’s a much larger sense of community, and I’m so glad to be a part of it.

“There’s still a lot of work to be done in terms of integration,” Julie says, smiling broadly as she talks about how she can contribute, “shifting the existing culture to not treat these people as outsiders is so important. As an industry, we’re missing out financially because of a lack of diversity.”