Entrepreneurs Tessa Sproule and Katie MacGuire have different backgrounds: Sproule the daughter of a professor and a Canadian country music DJ and MacGuire from Alabama, inspired by the social justice of minister Martin Luther King. The two met while working at the CBC in Toronto, sharing a passion for storytelling and alternative ways to engage audiences. Today, the duo run Vubble, a video content marketing company that helps brands build audiences on digital platforms. Below is an interview with the Vubble cofounders on the scary world of building a startup, and advice for others:

What sequence of events brought you to this stage of co-founding a start-up?

Tessa Sproule: I got my first job at CBC, and was there for almost 20 years. I saw the Internet come in; this new medium that I felt was going to help some of the stuff I felt uncomfortable with around media — that it was just washing over people. I wanted to balance what storytellers do best with the needs of a highly engaged citizenry and a public that understands the world around them in a deep and meaningful way. In August 2014, I left CBC to pursue this objective of getting the smartest, highest quality content in front of the audience that needs to see it.

Katie MacGuire: I left Alabama and did a degree in political philosophy and religious studies at McGill in Montreal. After McGill, I ended up in Toronto at the CBC, with the new media department. It was a great fit because I like experiential learning. I met Tessa at the CBC, and she spoke highly of the Canadian Film Centre, so I went there for a while to learn what I could from them. I bumped around and ended up at CBC TV, made some great documentaries there, and then ended up moving to CBC Radio, with the program As it Happens, which I loved. I then started to transition out to a company called Baby Center, that I was using as a resource at the time because I was pregnant and having my babies. Their whole mission is to make moms feel empowered to make intelligent decisions on their own. I outgrew it, both professionally and personally, and started to look outwards and really feel like we as a society were flooded with media that was unvetted and unsound and just noise. I wanted to continue to battle that out in the broader world. 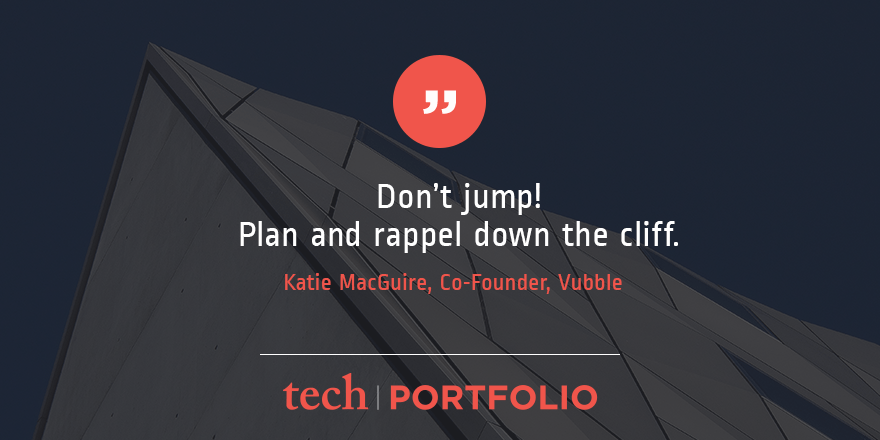 How did you two connect around the idea for Vubble?

KM: I wanted to start a business. I lived in Waterloo and wanted to plug into the innovative part of the economy. I went in to talk to Tessa (who was still at the CBC) about this idea for a self-awareness app. I described the app, and Tessa, who is more self-aware than I am, said “Why would somebody need that?” Tessa said she was also thinking about an idea. I told her she had to leave the CBC and just start.

TS: At that time, it was like a breath of fresh air to hear from Katie. It felt like a huge heavy knock at my door. While I was at the CBC, I was pushing hard for us to reimagine our digital presence away from a marketing machine pushing to a different medium. A lot of the impetus was around we just need to suck the most we could about what we were already creating rather than dedicating resources to creating content for digital specifically.

One weekend, I was sitting in my office, working on a presentation to help navigate through the great pressure on a legacy media organization, when I saw on twitter that actor Philip Seymour Hoffman had died. There was nothing on Newsworld, for almost 20 minutes. Meanwhile, not even 20 seconds later, George Stroumboulopoulos tweeted about his interview about Hoffman. That is powerful, the role of a public institution like the CBC is to really direct attention at the moment in time to the best content that is available. I started to think about why does it have to be about something we made? This is about the public discourse, can’t we come up with a different way of pushing out content, more like a feed? I just realized that given the pressures on the organization, it couldn’t happen at the CBC at that time. I felt like it was the time for me to make a move.

What were your first steps into the startup world?

TS: We did all the pre-reading, all the boring stuff that had to be done, getting incorporate, researching shareholder agreements and that kind of stuff. I’m always so flighty and up in the air, and Katie is so grounded and she made us get all our ducks in a row right from the start. That’s why we’re such a great ying and yang, because she’s able to force that to happen and then we just picked little pieces to knock off first.

KM: We had to spend some time figuring ourselves out, learning what each other’s strengths were. We created an advisory group of people who had expertise in areas that we didn’t understand, so, for example, a guy who runs an algorithm company in Waterloo, because we knew we would need knowledge of that.

TS: It’s kind of ideal that we’re mid-career because we both have very strong networks to count on and pull from.

KM: We had one really core meeting about five months into our partnership, where we had been building all this stuff privately, and there was an app developer that we wanted to work with. He called us and said “Make everything public, right now.”

KM: I think that was really the launch. That was a huge moment for us.

TS: There’s been a lot of those moments of intense clarity over the last two years.

KM: And just following that advice, of developing and adapting in public, and doing it live, we had 450,000 people on our site in a month.

TS: And crashed our site!

KM: But it was proof that people were interested, and it brought us to where we have been since, which is rapidly experimenting with what else could work besides just selling ads on something and how to build up an audience. We don’t just want to be a news service, and we came to that understanding by launching and learning from that process.

How has being a founder of a startup changed your life?

KM: It has been a deeply engaging, energizing and fantastic place for me to have my own thing. It’s not about me as a mother and a partner, it’s been about me as a business person. It’s been incredibly invigorating. I love it, I feel like I have a lot to say, I’m proud of where I am in my life, and I wouldn’t change a thing. 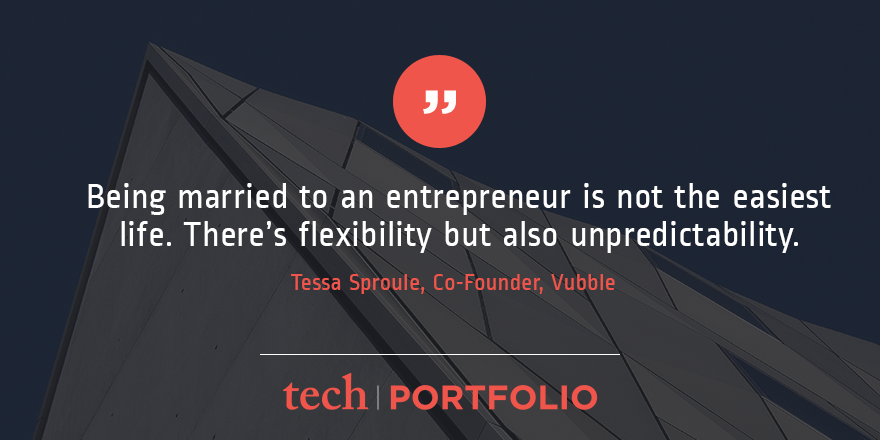 TS: It feels like the most natural thing I’ve ever done in the world (other than having babies!) I do have young kids, and there is some flexibility, we work out of our homes, so I love that. I would say, and I’m sure my husband would agree, it must be hard on our partners for us to be working all the time. He and I both see the light at the end of the tunnel for this, we know it will get better. I think being married to an entrepreneur is not the easiest life. There’s flexibility but also unpredictability.

What advice do you have for entrepreneurs?

KM: Don’t jump off the cliff!

KM: Find a safe way that is not going to kill you, cover your finances, learn new skills, network with people. I don’t buy the myth of “I’m leaving everything, so here I go!” A lot of people in the startup world work part-time and I think that is a great approach. It allows you to be calm financially, but have the flexibility to be creative. Don’t jump! Plan and rappel down the cliff.

TS: Rock climb with some guides! You wouldn’t leave if you knew it would be this hard and take this long. Katie is practical, and she tempers expectations, and that is important as well. What’s amazing is that so many people will reach out to help you. People you don’t even know, strangers you meet in a session, everyone offers to help.

KM: Two other pieces of advice from me – the research shows that it takes at least three years to be in the black. That’s a long time. It’s not three months, and anyone that tells you that it just takes three months spent six years before those three months building to this point. The other thing is that you really need to identify the things that you don’t know and bring in those people. It could be advisory, consulting, a day camp.

Where will you be in 10 years?

KM: I see running Vubble, it’s been a fantastic success and we’re continuing to make fantastic new products and that the learning curve that never stops.

TS: All of that, yes! We will both have teenagers, so we’ll be in a different place, and Vubble will be totally different. I don’t know what that will look like but I know I want to feel that we are building out a company further to help serve people and make the world better. If you’re not waking up in the morning to do that, if you’re not guided by that motivation, then what are we doing?

KM: And I want to have made a lot of money!

This interview has been edited and condensed.