The size of the Twitter conversation around Niantic’s Pokémon Go reflects the real-life activity playing out in public spaces across the US, Australia, and New Zealand, where players are feverishly trying to capture squirtles and pikachus.

In the aftermath of shocking racial violence and an against-the-odds UEFA win for Portugal, Pokémon Go has pulled ahead of these topics (as of July 11), notching up over 3.5 million mentions since the game was released on July 6. 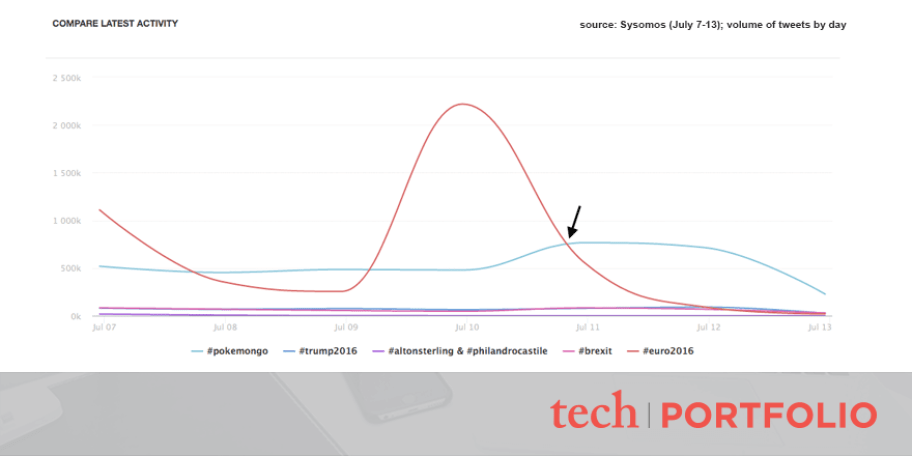 The runaway success of Pokémon Go shows how effective mobile together with AR can be for brands trying to boost user engagement.

Companies of all kinds have pledged “mobile-first” strategies, but few execute them well. Nor do they often pair the strategy with a UX that makes an app “everything right now.”

But, it’s not just mobile and AR that allowed such fast popularity.

Pokémon Go also leverages a data pool collected through an earlier AR game by Niantic, a company spun off from Google’s parent Alphabet. Niantic’s Ingress “formed a beginning pool of portal locations for the game based on historical markers, as well as a data set of public artwork mined from geo-tagged photos on Google,” according to Mashable.

If developers can learn anything from Niantic’s success, it’s the value of a long-term strategy that leverages robust data to power an immersive experience.

The Way Forward: Tech and Developer Stories That Defined 2016 and Will Shape 2017
5 Reasons 2017 Will Be A Transformative Year For Tech
Top 5 Tech Stories of 2016