The promise of cloud computing is scalability, collaboration, and dependability. But unless developers have access to a platform built around their needs and their preferences, the cloud remains limited in its ability to support enterprise solutions, a market worth upwards of $38 billion.

Until recently, using the cloud meant having the advantages of scalable power while relinquishing the control of an on-premise environment. IBM saw this gap as an opportunity and it became the basis for a new breed of Platform as a Service (PaaS), known as Bluemix.

Adam Gunther, Program Director, Bluemix Offering Management says that IBM started developing Bluemix from a user-based focus. “The next billion dollar idea always starts with a developer, alone in a coffee shop – that’s no different if you’re a startup or an enterprise.”

But the path from billion dollar idea to billion dollar app can be a messy one, full of obstacles like buying and configuring servers, creating application environments, and a hundred other tasks that prevent a developer from actually developing. Public cloud platforms were alleviating this, but as Gunther points out, there was still room for improvement. 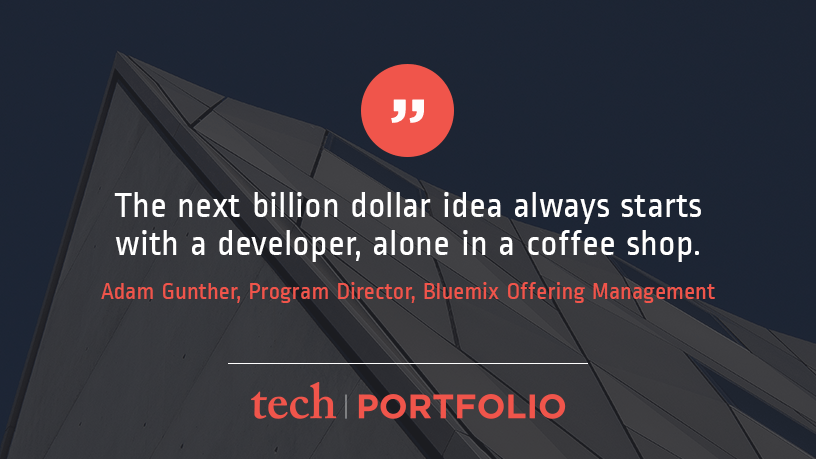 “What used to take 18 months, we can now do in a month,” Gunther says. “But that still isn’t fast enough. How does an enterprise, or just one developer, keep up with Silicon Valley?”

Speed and agility are important to developers, as BuildFax Founder and CTO Joe Emison told TechTarget. “Anything developers pick that they say allows them to deliver better software more quickly is going to win.”

Bluemix came out of this mission to create a cloud platform that could significantly speed up the process of developing scalable, enterprise-class apps, with the developer designed to be at the centre.

IBM was already in possession of a powerful Infrastructure as a Solution (IaaS) platform after acquiring SoftLayer, so the design team looked at the emerging PaaS market and came up with a product that not only differentiated IBM from other vendors, but provided IBM’s clients with a way to differentiate themselves from their competition.

Bluemix was built on Cloud Foundry, with support for open standards an integral ingredient in its architecture.

“What’s cool about Bluemix is that it gives devs in large organizations a secure sandbox to play in,” says Bryan Smith, CEO and co-founder of Toronto-based ThinkData Works, which is focused on providing APIs to standardized and normalized data from public sources.

Smith and his co-founder chose IBM Bluemix as their PaaS because of their commitment to providing developers with great tools. “They have a really similar mandate to ThinkData,” Smith says. “We look at it from a data perspective while IBM looks at it from a developer’s perspective.”

The Bluemix team opted for an open community model, combining the one million-strong developer membership of IBM DeveloperWorks with millions more on Stack Overflow. The benefit to this approach is, once again, speed for the developer. “Devs don’t want to call up tech support and ask for help,” Gunther says. “They want to Google the problem and come up with an answer quickly on a forum. The larger the community, the faster people can move.”

OpenWhisk, like Amazon Lambda and Google Cloud Functions, was released earlier this year. It is an event-driven “serverless” execution environment (sometimes referred to as a compute platform) and offers significant reductions in complexity and cost for developers who want to take advantage of microservices – small and light functions that do not require massive computing overheads. Instead of paying for the continuous up-time of a server, devs need only pay on a per-call basis.

Unlike Lambda and Cloud Functions, however, OpenWhisk is entirely open source. Not only can developers get under the hood and look at its inner workings, they can run the source code (and modify it) on their own, private machines.

As important as open technology and community support are, they aren’t enough to propel a PaaS product to be the preferred choice of developers and enterprise. For that, you need to offer users a large choice of software and services that can be quickly and cost-effectively integrated. This is one of Bluemix’s key selling points – a model that Forbes’ Greg Satell called “an app store for the cloud at enterprise scale.”

There are two major elements to this model. The first is the ability for Bluemix developers to choose from four application environments in which their code can be executed: OpenWhisk, Instant Runtimes (Cloud Foundry), IBM Containers (Docker), and IBM Virtual Servers (OpenStack).

Being able to choose an environment based on the design of your code without the need for multiple vendors or infrastructures is a huge advantage. If developing from scratch, devs can use OpenWhisk, an ideal environment for cloud-first projects, due to its cost-effective event-driven architecture described above. Meanwhile, given the increasing drive to move IT resources from legacy on-premises environments to the cloud, the option to create Docker-based IBM Containers or set up OpenStack deployments on IBM Virtual Servers means there’s no need to re-write for the cloud.

The second element, known as the Bluemix Catalog, is populated by a vast and growing array of services created by both IBM and third parties, across 13 categories including Data & Analytics, the cognitive technology of IBM Watson, Security, and Internet of Things, just to name four. Being able to bring these services to bear on a project allows apps to possess capabilities that simply couldn’t exist anywhere else.

Gunther points to Bluemix client GameStop, who came to IBM with a problem: daily inventory of their used game sales across their hundreds of locations consumed too much time and money. Employees had to manually identify every game box so that they could reconcile them with the game discs – every night.

GameStop was able to leverage IBM Watson’s neural net processing within a Bluemix app to process image captures of store shelves. Watson was able to return accurate counts for the video game boxes – sorted by title – even when the boxes were partially obscured or tilted on their sides.

Having access to IBM technologies such as Watson is a huge benefit to developers, but historically IBM hasn’t been an easy choice for them. “Over the last 20 years or so, we developed a reputation of being great and powerful, but really hard to use,” Gunther says. To counteract that perception, Bluemix was built to address two major considerations: lock-in and cost. 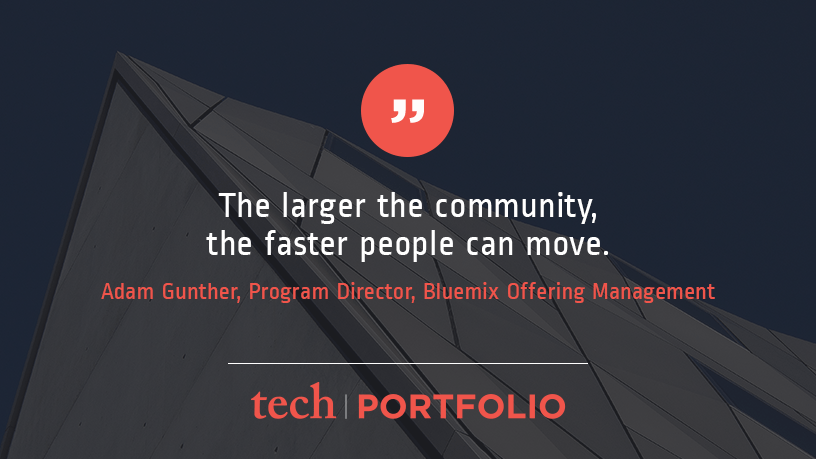 “A lot of companies do worry about lock-in,” Dave Hrycyszyn, Director of Strategy & Technology at Head, told TechRadar in 2015. Bluemix avoids this concern. “We go in assuming that multi-cloud and portability are must-haves,” Gunther says, pointing out that any company which makes this difficult for clients won’t see adoption of its platform.

Bluemix’s commitment to open standards helps with this greatly, as does its policy of not forking these open technologies.

“You could run a CloudFoundry app on Bluemix one day, and HP the day after that,” Gunther says. IBM has also taken the position that its Bluemix services should be portable too. If you developed an app on Bluemix with calls into the Watson service for example, you could move that app to another cloud provider or even take it in house. As long as the Watson API key remains the same, you’ll still be able to access that service from your app.

As far as cost goes, Bluemix has a free 30-day trial with 2GB of runtime and container memory to run apps – no credit card needed. There are free service and app tiers designed to let anyone experiment at no cost. Once you’re feeling comfortable, there’s a “down-to-the-penny” pricing calculator which gives precise numbers for every component of the Bluemix platform.

A strategy that focuses on the user, instead of the technology for its own sake, means that developers can concentrate on getting their work done. “Community and open technology are the underpinnings of our entire technical strategy,” explains Gunther.

For a free trial of IBM Bluemix click here.