VC Funding and the Culture that Rewards Failure
Billions in VC funding deals could be lost due to a high tolerance for failure.
Maheen Zaidi

This has long been a mantra within startup cultures, but the industry doesn’t appear to be benefiting, at least financially.

The failure hype may have gone too far.

While many stakeholders in the tech startup space have accepted – and even celebrated – failure, Re/code co-founder and executive editor Kara Swisher points to VCs in particular.

“You can fail 99 times and VCs will still shove money in your hands,” Swisher told the crowd at Startupfest 2016 in Montreal last month, questioning the extent to which failure among startups has been celebrated.

Failure in the startup world has contributed to a recent increase in down rounds and financial losses.

"You can fail 99 times and VCs will still shove money in your hands" – @karaswisher on #failure & funds #Startupfest pic.twitter.com/avKQsKnqec

Citing data from Adams Street Partners, Forbes reported that roughly 55 percent of capital went towards losing deals over a 10- and 30-year period, meaning that the track record hasn’t improved. Extrapolating from these numbers, upwards of $32.34 billion invested in startups across U.S. in 2015 might be gone.

Even worse, prominent VC Mark Suster recently speculated that loss ratios will increase in the near future.

Startups fail at higher rates than the industry usually cites, Harvard Business School lecturer Shikhar Ghosh told StartupGeist. Based on Ghosh’s 2012 study of 2,000 companies that received at least $1 million in venture funding between 2004 through 2010, 95 percent of startups failed to provide their projected returns on investment.

Given the recent writedowns of many unicorns-in-waiting and declines in VC funding, tech startups may find investors becoming less tolerant of failure. But before this cultural shift can occur, VCs must address their high tolerance for failure.

For startups, VC acceptance of failure has been more damaging than supportive, in part because some startups think honesty is not always the best policy. As noted in a previous TechPORTFOLIO article, startups have become more creative with their metrics and how they define profit in order to secure funding. 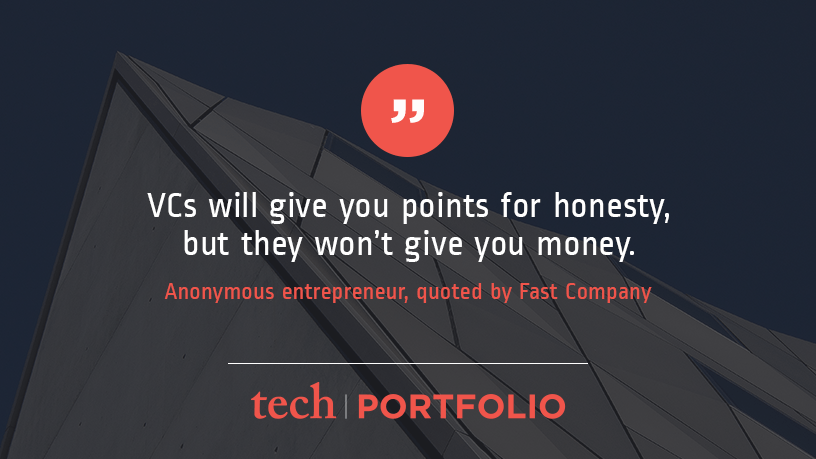 “Being honest in Silicon Valley is like being the one member of an Olympic team that isn’t on steroids,” entrepreneurs who wished to remain anonymous told Fast Company. “VCs will give you points for honesty, but they won’t give you money,” said another, also speaking anonymously.

Another founder claimed he was turned down from a financing round for having “too much integrity,” according to the article.

Promises of success evaporate over time, trust is eroded, and the poor due diligence that was overlooked in the initial stages becomes too problematic to ignore. When a startup does fail, VCs are reluctant to acknowledge it.

As a result, aspiring startups lose the opportunity to learn from the mistakes of failed startups. When a startup does not fail outright, its faltering is either unacknowledged or labeled a “pivot.”

The problem may ultimately come down to flawed funding models and the standards around valuation. Despite our increasingly data-drive economy, VCs still struggle to use that information to reduce their instances of failure.

According to TechCrunch, VCs are more confident about their decisions when they have more information, even though it doesn’t lead to better decision making. VCs also tend to favour entrepreneurs similar to them and those in close geographic proximity — not exactly the most accurate indicator of success.

The RIP Report – Startup Death Trends from CB Insights stated that companies “die,” on average, around 20 months after having raised $1.3 million.

Less than 10% of @500startups investments will have a meaningful economic return, says @davemcclure at #Startupfest pic.twitter.com/1aL0oYSUSe

As tech ecosystems begin to better understand their own metrics, new, more accurate methods for determining valuations may arise.

This may require VCs to reach consensus on what metrics they will accept from startups, and how those metrics will be defined.

Only then will the fetishization of failure be replaced by a drive towards long-term success.